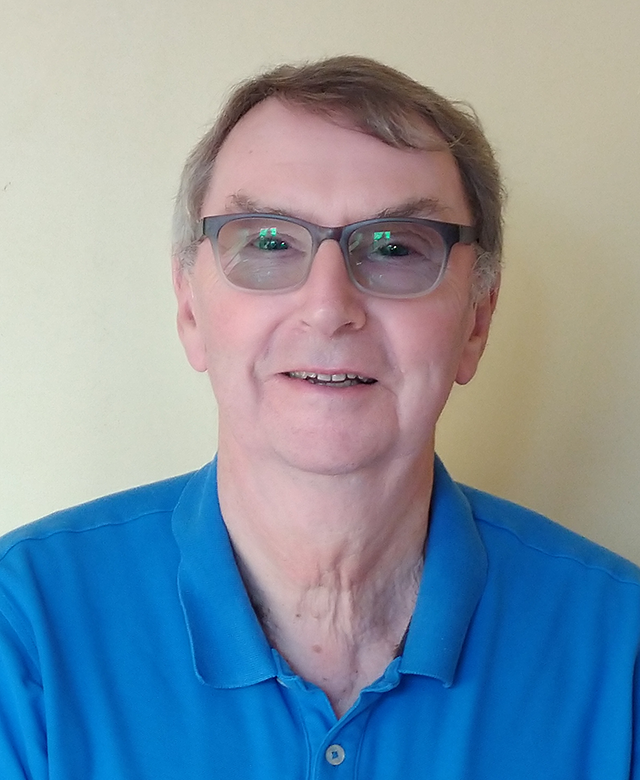 My story begins in my teens when I started to suffer from upset stomachs, diarrhoea and blood in my stools.  My doctor put it down to a combination of Antibiotics and IBD and took me off antibiotics which brought some improvement and certainly stopped the bleeding.

As the upset stomachs and diarrhoea continued, I was eventually referred in my early twenties to an eminent gastro specialist, Dr Trevor Cooke at Birmingham’s General Hospital who identified my condition as Ulcerative Colitis. I attended his clinics and those of his successor, Bob Allan twice a year, for the next thirty-five years or so. I was put on steroids quite early on and remained on them throughout this lengthy period of time.

From time to time I endured sigmoidoscopies which I certainly did not look forward to. I do remember, presumably before they became a fully established form of investigation, one famous occasion when I undressed and was given a hospital gown and was then strapped to a contraption almost like a trouser press. The contraption was then tipped up, so my head was close to the floor but my bottom in the air, and an instrument that appeared to be a very cold silver steel poker was inserted into my rectum. This procedure took place, as I recall, in an open corridor with a dozen young medical students in attendance. I have never forgotten it but thankfully, things have improved!!!

However, despite assurances from Dr Allan that as I grew older my Ulcerative Colitis would settle down and I would never need surgery, my condition did not improve and if my steroid dose was reduced it was quickly re-established, as a lesser dose proved insufficient at helping to contain the condition. Like most of us, I found in times of stress my condition worsened, and in 1993 whilst on holiday abroad, I had a particularly bad attack. On our return to the UK, I was admitted to the General Hospital where I spent two weeks in recovery. My job at this time was very challenging and on my return to work my employer decided to dispense with my services on the grounds of ill health!

At this time I entered the wonderful world of education for the first time and obtained a job as a School Bursar, the title later upgraded to a School Business Manager. I spent the happiest time of my working life in this role until significant changes to the composition of the Governing Body led to another particularly stressful period and another serious flare up in my condition and hospitalisation, spending twenty-three nights in the old Queen Elizabeth hospital. At the follow-up appointment with a Surgeon, he suggested that in view of the severity of my flare up I should think about surgery. This view was reinforced by Doctor Allan when he visited me in hospital, suggesting that due to the severity of my recent attack, I was now at a very high risk of getting bowel cancer and so I agreed to have surgery. This took place in February 2005. I made the early decision to opt for an ileostomy and not consider a future reversal or a Pouch, having done considerable research and being reluctant to put myself through more than one bout of surgery.

The operation was performed at the Queen Elizabeth hospital by Dion Morton, now Professor Morton, and was a great success. I was home in five days and spent six weeks convalescing before a phased return to my job. The most memorable thing about my short stay in hospital was that the SCN team at the QE asked me before surgery if I would welcome a visit post-surgery from an established ileostomist and I said yes. I then forgot all about this until this super-fit man I had never seen before came striding down the ward to my bed on the third day of my recovery and introduced himself. He explained he had had ileostomy surgery some eight years previously and had never looked back. He added that he was a telecom engineer, frequently climbing up telegraph poles or squeezing under floorboards. His visit gave me such a lift at a challenging time. Amongst the many bits of useful advice he shared with me was a tip to always kneel down when emptying one’s bag, a tip I continue to follow today, although I realise there are several alternative options available!.

The two things that happened to me post-surgery were that firstly I found myself struggling emotionally for some time, which I had not expected at all. I had a very supportive wife and children, but still felt I needed emotional support. I remember contacting the person I shared a room with at the hospital just for a chat, someone going through the same range of emotions as myself and although we only spoke once, it helped me enormously. At the same time, I also joined Birmingham IA, as the nurses at the QE had made me aware of this organisation. I spoke with Peggy Costello, the membership secretary, a couple of times and received reassurance and support from her. Peggy is still our membership secretary today and has worked tirelessly for Birmingham IA for so many years.

The other thing that hit me when back in the outside world was how little I knew about my stoma or what to do with it, or what to expect. Life is something of a whirl post-surgery and although I was only allowed to leave hospital once I was able to change my bag myself, I was totally oblivious to stoma bags, who supplied them, the different types of bags available on the market, accessories etc etc or the support available through SCNs in the community. It took me a few months to find the bag that suited me best, which of course meant there were a few initial challenges with leaks. I was fortunate that I worked less than three miles from home, so could reach home quickly in emergencies. One of my biggest concerns based on my own experience was, and still is, how important it is for Stoma Care Nurses to make patients aware of support organisations like IA and CA (Colostomy Association) who are out there to help new ostomists coming to terms with their new friend!  With the advent of social media, more and more people, particularly the young, are tending to rely on the Internet for help and guidance, but I remain of the opinion that the knowledge and experience of long-standing ostomists, together with the support and wisdom of the Stoma Care Nurses in hospitals or the community, are the best sources of advice and guidance for those new to having an Ileostomy or Colostomy. I have also realised that most GP surgeries have limited experience of patients with ostomies, and that new ostomists benefit enormously from contacts with organisations such as IA.

After a challenging first few months after surgery, things quickly settled down, I was able to eat a much more varied diet including a number of foods that I had never eaten before and suddenly, instead of being a nine stone weakling with a fourteen-and a half inch collar, I was more than three stone heavier with a sixteen-and a half inch collar size: and as for my lifetime 32 inch waist line! No food is off limits to me as long as I make sure I chew thoroughly, I am able to play sport, go abroad on holiday and do things I have missed out on for so much of my adult life!

A few years ago I was invited to join the Committee of Birmingham IA and was pleased to accept the invitation. Within six months of joining the committee, the long-standing chairman Peter Jones suffered a major stroke from which he never recovered and sadly passed away. I found myself thrust into the role of chairman. I was lucky to have Mary Cotterill, a retired Stoma Care Nurse and driving force of Birmingham IA for many years, and Andrew Stubbs, a retired businessman, our Treasurer, and a man of great wisdom, to turn to for advice and guidance in those early days. Their help was invaluable. It is so sad that they too have both now passed away during the Covid Pandemic.

I am though, still very lucky to be supported by such a dedicated and hard-working committee. I believe that we have achieved a great deal in the last few years to raise our profile in the local community, as proven for example, by our work supporting Stoma clinics at Heartlands Hospital, in creating a member Database, in our social media presence and in the creation of our own website.